Rishikesh is a town located in the North Indian state of Uttarakhand at 409 m above sea level in the foothills of Garhwal Himalayan Range. The town has an approximate population of 75,000. Rishikesh has a spectacular view of jungle clad hills. This place is the confluence of River Ganges and Chandrabhaga. The mighty river Ganges is the one glorious attraction of the town as it flows through the city. The town is known as the abode of sages as it has been home to many yogis, sages and sanyasis since time immemorial. There are many ashrams in the town and Rishikesh is famous as the world's capital for Yoga. Every year in the month of March the International Yoga Festival is held in Rishikesh.

History of Rishikesh
The Garhwal region of Uttarakhand has been mentioned in the Skanda Purana as Kedarkhand. According to Skand Purana the area is named as kubjamrak because Lord Vishnu appeared here to Raibhya Rishi under a mango tree where Raibhya Rishi did his long penance. Lord Vishnu here appeared in the form of a sage "Hrishikesh". The name is the combination of two words "Hrishik" meaning senses and "esh" meaning master. Hrishikesh means "master of senses". Skanda Purana mentions that the Lord Vishnu blessed Raibhya Rishi and gave him this divine message: "while you have performed supreme tapasya (austerities) by controlling your senses, let the place be recognized as Hrishikesha (Lord Hrishikesha, master of all senses).

While according to the Sthala Puran Raibhya Rishi preferred the sacredness and beauty of the place where Lord Vishnu appeared, so he remained there in the form of intense plants, which look like his matted locks and in consideration of this and the divine qualities of Raibhya Rishi, the area is recognized as Rishi Kesha or Rishikesh, or the hair of the Rishi (Sage).

Rishikesh is also mentioned in the Hindu mythological literature as the place where Lord Vishnu defeated the mighty demon Madhu. Also, according to Ramayana Lord Ram made hard penance for killing mighty demon Ravana. Lakshmana (Brother of Lord Rama) crossed the river by Jute Bridge which is known as Lakshman Jhula. The Jute Bridge was replaced by Iron suspension bridge in 1889. The bridge damaged in 1924 flood, than bridge was replaced by new bridge. 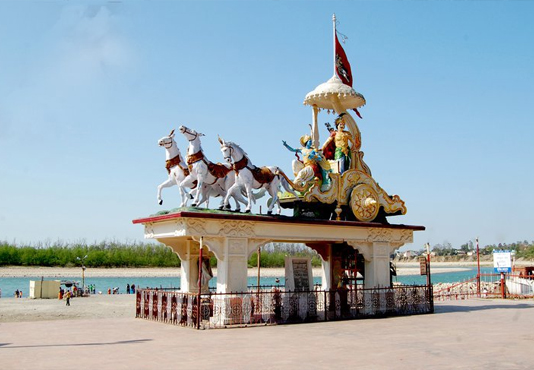 Triveni Ghat is the biggest bathe taking ghat in Rishikesh. Situated near the main market this ghat has a mesmerizing view of mountain and river. It is believed that this is conference of 03 rivers Ganges, Yamuna and legendary Saraswati giving the ghat its name. 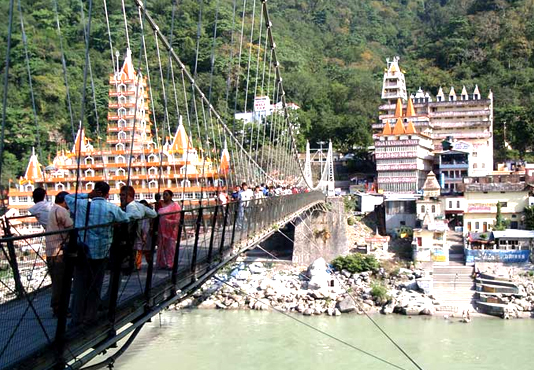 Big iron suspension bridge on the river Ganges which is 4.5 kms outside of Rishikesh. It is believed that Laxmana (Brother of lord Ram) crossed the river here by jute rope. The current bridge was built in 1929 in when the old bridge (1989 built) was damaged in flood. Laskman Jhula is popular among tourists for shopping and other activities such as rafting. 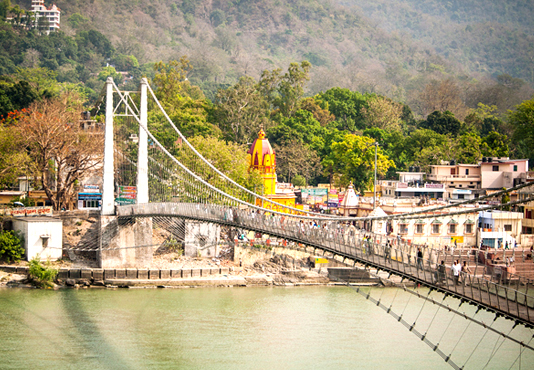 A Suspension bridge similar to the Lakshman Jhula between Sivananda Ashram and Swarg Ashram is known as Ram Jhula or Sivananda Jhula. Boat is also available here on sharing basis to cross the river. Ram Jhula is a pedestrian bridge but it is also used for two wheelers. 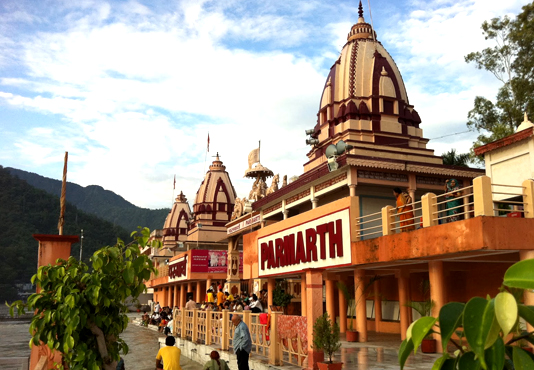 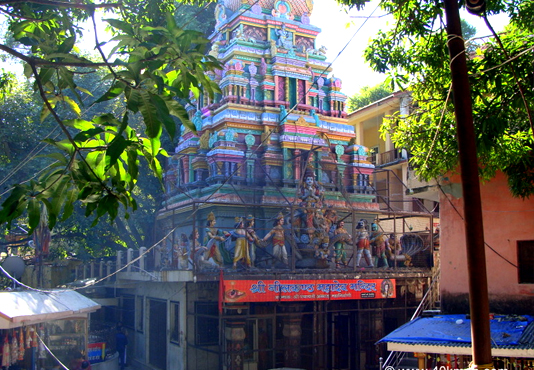 This temple is situated at 1325 meters height and 31 kms outside Rishikesh. Neelkant Mahadev is Temple devoted to Lord Shiva. According to legends Lord Shiva came here for meditation when he consumed poison during the sea churning. Lord Shiva's throat became blue colored due to the poison so he is known as a NeelKanth (Blue throated) here. 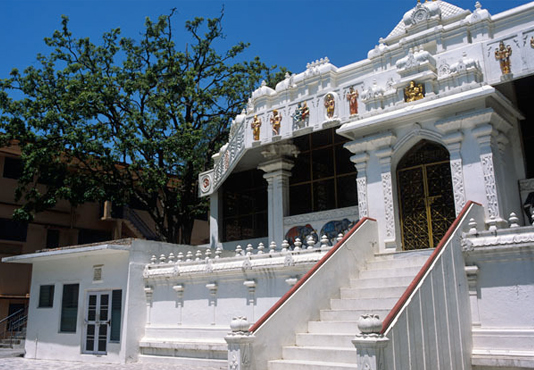 Sivananda Ashram is also known as Divine Life Society. It is located near Ram Jhula. Sivanada Ashram was established by Swami Sivananda. Swami Sivanada lived here for more than 30 years. There are several activities performed by the Ashram such as Yoga Meditation and hospital. 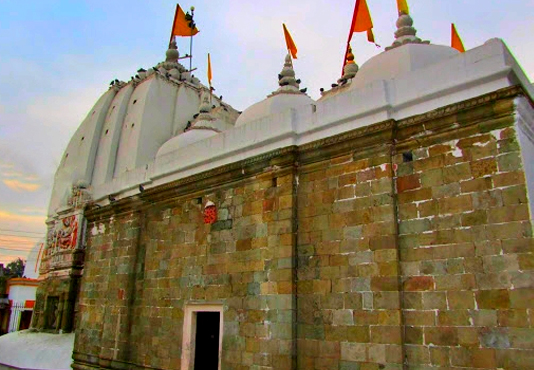 Bharat Mandir Temple is situated at the center in Rishikesh and near the main market. This is one of the oldest temples in Rishikesh. The deity of the temple is Lord Vishnu. Raibhya Rishi made penance here and lord Vishnu appeared in front of the sage to give him blessings. Temple has small museum also. 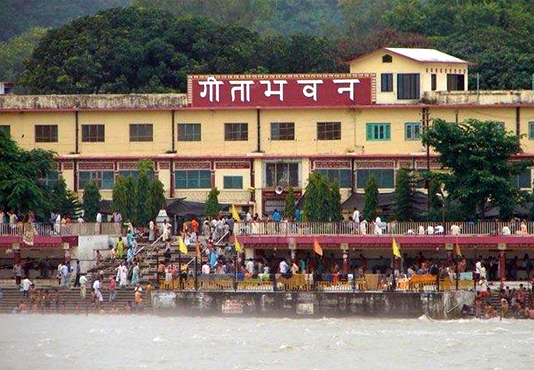 Gita Bhavan (Geeta Bhawan) is an Ashram located in Swarg Ashram area. The ashram has large complex with discourse hall and more than 300 rooms which they are offering to tourists at very low cost. There is a temple side the ashram. 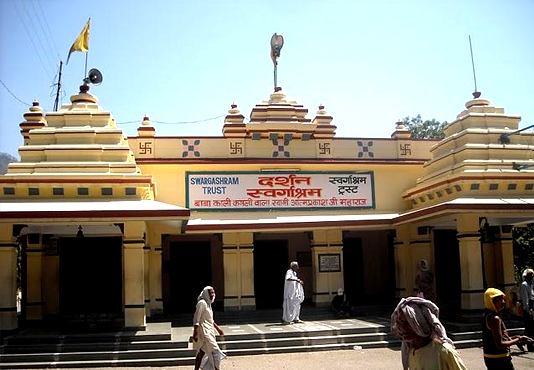 Swarg Ashram is area between Lakshman Jhula and Rishikesh. This place is well known for various famous ashrams, beautiful surroundings, healthy and divine living. So many shops are also here for shopping. Place is accessible via Ram Jhula bridge by walk or by road via Beraj. 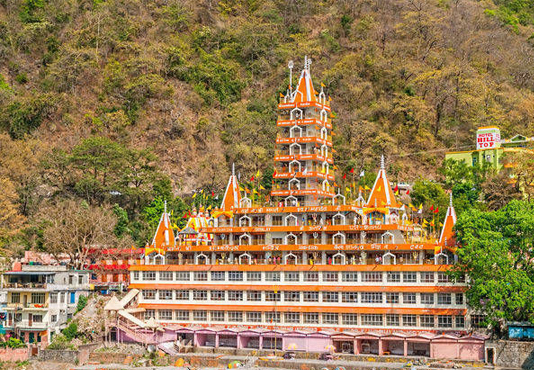 Tera Manzil Temple has 13 floors. Each floor has many small temples with different deities. This temple is located near the Lakshman Jhula. The view from the top of the temple is amazing. Temple is also known as Trayambakeshwar Temple, Trimbakeshwar Temple or Kailashanand Mission Trust. 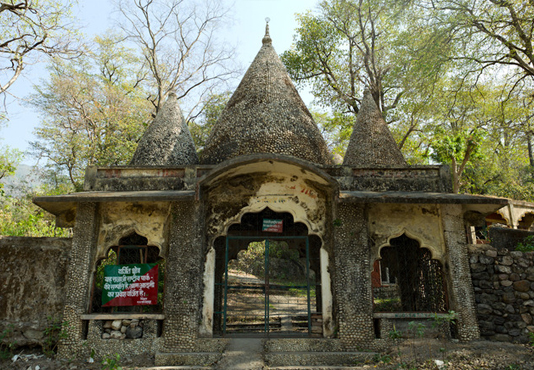 Beatles Ashram is located in the Swarg Ashram this ashram is closed in 1997 and consumed by forest department. Still there are some building such as meditation cells and lecture halls are there as a witness of the glory of ashram. In February 1968 Beatles stayed here to learn yoga and meditation. 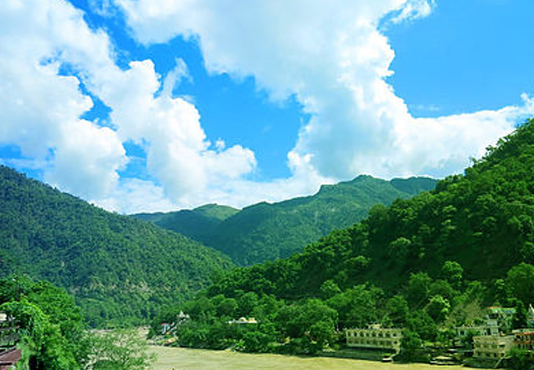 Here you can learn to make some music instruments from Indian old men Mukesh Dhiman. Australian Didgeridoo and African Djembe are specialty of Mukesh. 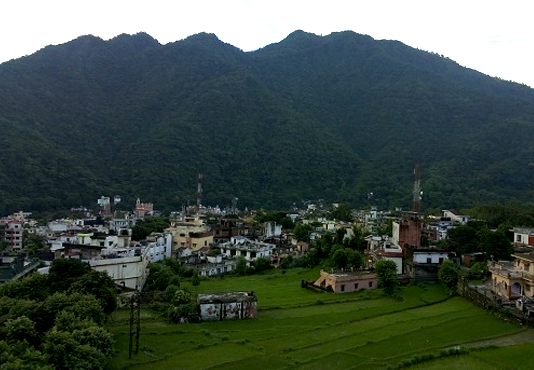 Other places to visit in Rishikesh: