Kunjapuri is located at a height of 1645 meters above sea level and lends a panoramic sight of the Himalayan peaks in the North and Rishikesh, Haridwar and the Doon valley in the South. Travelling towards Gangotri, about 6 kilometers from Narendra Nagar the road diverts at Hindola Khal, leading to the shrine, which is 5 kilometers further.

Being an important religious place, 1000s of visitors come throughout the year especially during 'Navratras' (April and October). Grand Celebrations are held during the Dussehra festival. One can witness excellent sunrise and sunset on the Greater Hiamalayan Peaks and the vast Indo Gangetic plains. 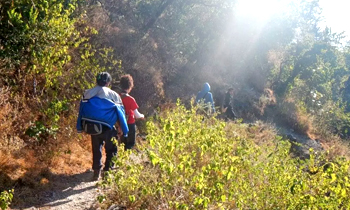 Neelkanth Mahadev is a Temple of Lord Shiva located at a height of 1330 meters. This temple is 31 kms far from Rishikesh. It is very famous temple of Lord Shiva. There is a 14 km trek from Rishikesh to Neelkanth Mahadev. The whole way to temple is surrounded by dense forests. According to legends Neelkanth Mahadev Temple is the holy location where Lord Shiva consumed the poison which originated during the sea churning when Gods and Demons churned the sea in order to obtain Nectar. Due to this poison Lord Shiva’s throat became blue in color. So he is known as Neelkanth here. (literally meaning the blue throated one).Trekking is the best way to reach the temple. Later one can return to Rishikesh by car or local shared vehicles. 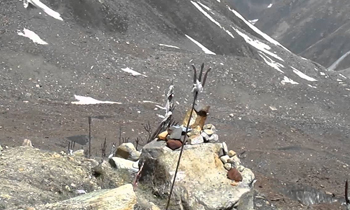 This cave is 26 kms far from Rishikesh. You have to drive 04 kms more from Neelkanth Mahadev Temple. From there you have to trek 02 hours to reach here. 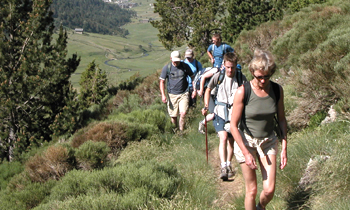 It takes only a half day to trek in the waterfalls. These treks are famous for their natural beauty. You can also enjoy bathe at waterfall. 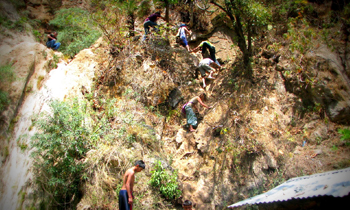 Valley of Flowers Trek near Rishikesh

Valley of flowers tour is special adventure trekking tour near Rishikesh and is famous among nature lovers. Situated high in the Himalayas of the Uttarakhand, at an altitude of 3,600 meters above the sea-level, protected by snowy mountains deep in the heart of the Himalayas, Valley of Flowers is a beautiful spot. Many unique species of Himalayan wild flowers find there home here in this secluded valley. During the months after monsoon the valley is covered with a myriad of colors! It is an awesome sight of colors with a contrasting back drop of majestic peaks. The snow on the Himalayan Mountains add majesty to the mountains and the innumerable flowers add to its beauty. This valley was unknown till a British mountaineer Frank Smith first discovered this place. 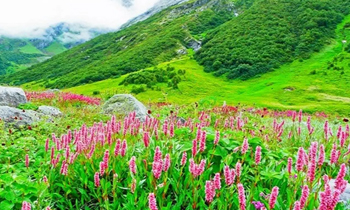 In 1931, Frank Smith wanted to scale a peak in Garhwal called Comet. While returning after successfully completing his mission, he took the western pass and lost his way and reached this valley after many difficulties. All of a sudden he came upon a sea of flowers which totally enchanted him. He put up a tent and stayed here for many days. During these days he collected 260 different species of flowers. Some of the flowers are saxifrags, sediams, lilies, poppy, calendular, daisies, denthus, turmopsis, primula, dadiculatar, pontitala, geranium, cipro nepolysis, holly, pansy, zinnia, petunia, fox, caropsis dynthus etc. He took some seeds back with him. In 1937, he came back again to this valley and stayed here for a long time. Then he wrote a book called "The Valley of Flowers". Soon this place became famous all over the world. Nature lovers started visiting this valley.

Gomukh is a place in Gangotri glacier where the Bhagirathi river originates. Bhagirathi River is also famous as River Ganges. The official river Ganges starts at Devprayag when Bhagirathi river merged with river Alaknanda. The Gaumukh is located at the height of 13,200 fts. Gomukh means "Mouth of a Cow". Gomukh is 18 kms far from Gangotri town. The trek is very hard and only a few people dare to reach here, thats why the whole area is still best for nature lovers without pollution. Trekking permit is required to reach Gaumukh which is issued at Uttarkashi. The Nandan Van trek should really be called the Gangotri-Gaumukh-Nandadevi-Tapovan Trek. It is particularly interesting because it offers a wide variety of Himalayan trekking experiences: rock climbing, and glacier traversing. Nevertheless, it is considered to be a trek which even non-mountaineers can undertake fairly comfortably. You can place yourself in the hands of one of the many competent trekking outfits. 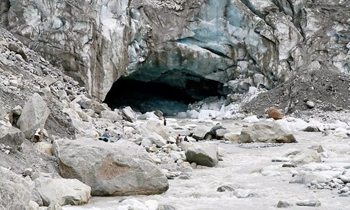 Hemkund Sahib Yatra is famous yatra for Sikh religion. This scared Sikh shrine is situated on the shores of the Hemkund Lake at 4320mtrs from sea level. It marks the place where Guru Govind Singh, the tenth and last Guru, unified with God after prolonged meditation in his previous birth.

The guru's autobiography which contains a description of the place helped two devout Sikhs, Sant Sohan Singh and Havldar Mohan singh to rediscover it. According to Hindu mythology, Hemkund or Lokpal as it is also known is where Lakshman had done his penance. 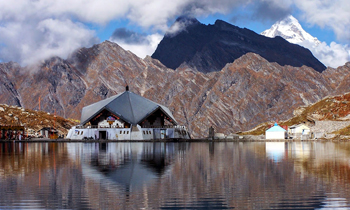 Hemkund is a 15km trek from Govindghat, which is the gateway to the Bhyundar or Lakshman Ganga valley. Govindghat is on the bus routes to Badrinath. The trek from here to Hemkund takes one through forests of pine and rhododendron where wild broses, ferns and alpine flowers bloom. The surging waters of the Lakshman mandir and Ganga are also visible. The last 5km of the trek entails a steep climb from Ghangharia, which is a base for visiting Hemkund. Bits of ice still float on the waters between July and October, the best season to visit Hemkund. The rock strewn shores of the lake are covered with moss and flowers in bloom.